Dinosaurs are reptilian creatures that lived during the Mesozoic Era. They lived on Club Penguin Island during that time, along with Dinosaur Island. The island looked very different, covered in jungles, dirt, and volcanoes. There were many different dinosaurs, consisting of many different colors, shapes, and sizes. Some had wings (but they could only glide, not fly; some of them could not glide). Some were carnivores, some herbivores. Some even had feathers, but still could not fly. Today, non avian dinosaurs (dinosaurs that are not birds) don't exist, as they became extinct. The only place dinosaurs still exist, in the Club Penguin universe, at least, is Dinosaur Island, which could be explored during the party Rockhopper's Quest. Scientists do not have very much information on them, due to them living long ago. However, one present day penguin scientist named Gary the Gadget Guy invented a time machine, the Time Trekker 3000, to visit Club Penguin island during the Mesozoic Era, in which he and other penguins encounter many dinosaurs, and learned more about them. He did this once again for the Prehistoric Party 2014.

The Dinosaurus Rex is a species of dinosaur that appears in the Dinosaur Island. It is based on the Tyrannosaurus.

The Raptor is a species of theropod dinosaur that appeared at the Prehistoric Party 2014.

Stegosaurus is a species of armored dinosaur that appeared at the Prehistoric Party 2014.

A Log Off Screen featuring Tyrannosaurus, Triceratops and Pteranodon 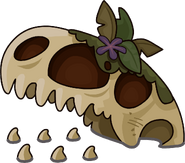 The skull of a Dinosaurus Rex

Dinosaurs in The Penguins that Time Forgot Stage play

Looking closely at this photo of the Clothes Shop during the Holiday Party 2012, there are plush and toy dinosaurs around the room. This could have been hinting at the party happening a month later

Many different kinds of dinosaurs on a wallpaper 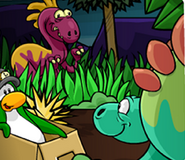 Chester with a Utahraptor and a Stegosaurus

Dinosaurs in the video Dubstep Puffle 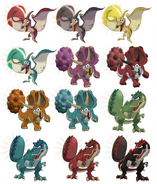 All Dinosaur Eggs and the transformation during the Prehistoric Party 2013 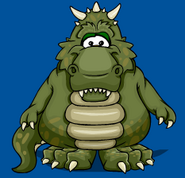 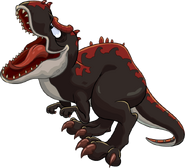 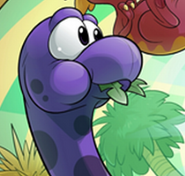 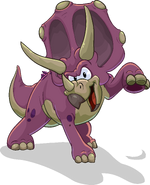 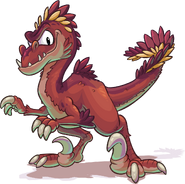 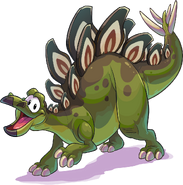