The Dojo was a secluded building, high in the mountains. Here, the master Sensei trained penguins in the ancient art of Card-Jitsu, by teaching them of the elements of fire, water, and snow.

The Dojo had several training mats for playing Card-Jitsu. In the center, there was a cushion where Sensei sat. All four walls had doors which led to paths to other locations, three of which were other dojos. West was the Fire Dojo, north was the Water Dojo, east was the Snow Dojo, and south was outside, to the Dojo Courtyard. Additionally, the Martial Artworks catalog was located here, which sold ninja items and power cards.

Before the launch of Club Penguin, the Dojo was built by Sensei at an unknown time, many years ago, in order to train penguins to respect the power of the elements, and also master the elements themselves, after a fateful battle with his old friend Tusk. Some time after building the Dojo, he left to explore The Wilderness, in order to train.

The Dojo was then one of the original rooms in Club Penguin. At this time, it was completely empty, and also hidden on the map, requiring players to click a spot in the mountains. It was not until November 3, 2008, that something significant occurred at Dojo, where lightning from a storm struck the Dojo, causing the Dig Out the Dojo project to help repair the Dojo and dig it out from the snow. During this time, Sensei returned to the Dojo. After repairs were finished, Sensei, displaying gratitude, agreed to teach penguins Card-Jitsu, and training began on November 17, 2008.

On May 28, 2009, the Dojo received a minor change. The three elements on the torii above Sensei's cushion were replaced by a sign labeled "Card-Jitsu", and players were able to view their Ninja Progress here.

On May 23, 2013, the Dojo underwent a quick renovation. Aside from receiving a graphical update, components from the since removed Ninja Hideout were transferred here, including doors to the fire, water, and snow dojos, the Martial Artworks catalog, and a large amulet-like pattern on the floor.

Dig Out the Dojo

Dig Out the Dojo (second phase)

Dig Out the Dojo (during reopening) 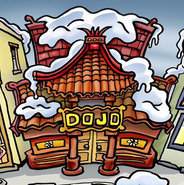 An early design of the Dojo, when it was planned to be in the Plaza

Early art concept for the Dojo

A concept art of the renovated Dojo