Dory is the deuteragonist that appears in the Disney/Pixar film Finding Nemo (2003) and the titular protagonist in its sequel Finding Dory (2016).

She appeared at the Finding Dory Party, introducing herself and assigning the player tasks.

Dory is a very optimistic, kind, ditzy but forgetful fish. This is because she suffers from short term memory loss. However, she has a heart of gold, and willing to go full lengths to help Marlin find his son (even though she can never remember his name). 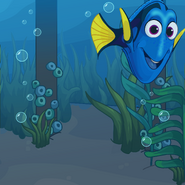 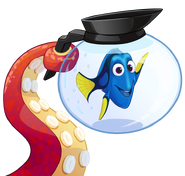 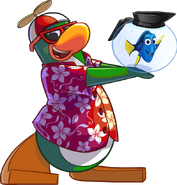 Rookie holding a coffee pot with Dory in it 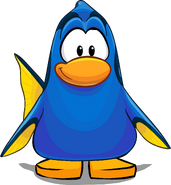 Retrieved from "https://clubpenguin.fandom.com/wiki/Dory?oldid=1833603"
Community content is available under CC-BY-SA unless otherwise noted.