Dragons are reptilian winged creatures in Club Penguin. Dragons are famously enemies of knights and in Club Penguin players pretending to be dragons often try to kidnap princesses. Despite this, a blue dragon helped a princess, a silver knight, and a court jester find treasure in a story in the Club Penguin Times.

They are mostly commonly seen during the Medieval Parties. Dragons are usually known to strike or be seen during these events. At the Medieval Party 2008, a robotic dragon was at the mine for penguins to control with the Switchbox 3000. Many quests were made during these parties to destroy the dragons, usually underground near lava. A very similar creature is a Hydra, which may be based on the Hydra from Greek mythology. They are like dragons, but without wings and they have 3-9 heads when born and can grow two more if one is chopped off. They may be distantly related to dragons. A Hydra was defeated during Ye Knights Quest 3.

At the Medieval Party 2012, the dragon king Scorn returned to Club Penguin to plot revenge on the kingdom. At Medieval Party 2013, you could use potions to transform into a Dragon Puffle and Ultimate Mega Dragon.

All dragons are reptilian creatures with two wings with two arms and legs, and two very long sharp teeth and big eyes. The dragon's head has several horns and fringes. All of the dragons have forked tongues, but the red and green dragons' tongues are red, while the blue and purple dragons have blue tongues. 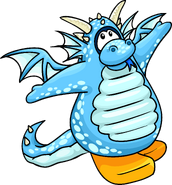 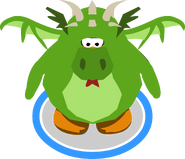 A penguin wearing a Dragon Costume 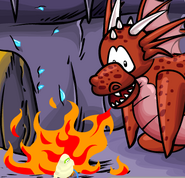 A red dragon during the Medieval Party 2008

A penguin pretending to be a green dragon 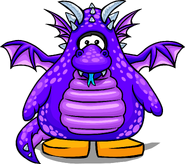 A Purple Dragon Costume on a penguin

A dragon sighting before the Medieval Party 2012

A penguin wearing a Dragon Costume 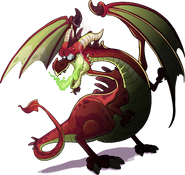 The Ultimate Mega Dragon at the Medieval Party 2013