The EPF Command Room (full name Elite Penguin Force Command Room) was the prime base of operations for the Elite Penguin Force. Here, the EPF conducted research, trained, experimented, and tracked down threats to the Club Penguin Island. After the destruction of the PSA Headquarters, this new base for agents was constructed, adopting from the original Command Room, which was connected to the PSA HQ.

The center of the EPF Command Room was occupied by a meeting table and large monitor, with smaller monitors that provided surveillance for various locations. The main database for the EPF was next the meeting area, and in addition to a large storage of technology, housed System Defender and Spy Drills, two ways to train agents. Beneath the database was a small jail cell with electronic "bars".

The bottom right corner served as a small lab, and also was host to EPF Training Missions. Various shelves with agent gear were nearby, but served no purpose. The top right corner of the room had a tube transporter that led to the Everyday Phoning Facility. Various fountains poured down water as well.

The room was built on May 27, 2010, after the destruction of the PSA HQ. However, it lacked many of its later functions, and was under construction. There were boxes with files, disks, and other things being transferred from the old HQ. Many of the lights were not working yet. The tube transporter to the VR Room was not finished, and various laptops were plugged in machines to transfer data. A week later, on June 3, 2010, the room was mostly finished. However, the tube transport was still not complete, and the monitor for Field-Ops was not ready yet. The other monitor, which would later host System Defender, was a "system scanner" and clicking it would cause the computer to search for abnormalities. However, none would ever be detected.

On June 10, 2010, the tube transport to the VR Room was complete, and on June 15, 2010, Field-Ops were available. On January 14, 2011, System Defender replaced the system scanner. On August 31, 2011, when the Great Snow Race ended, an image of Herbert sleeping in his mountain base was added to the top left corner of the monitor, and clicking it would enlarge it to fill the whole screen. During the Holiday Party 2011, Herbert was dressed up with a Santa hat and socks and an opened present was added to the chair next to him, and Klutzy was visible on-screen, sleeping as well. During the Underwater Expedition, Herbert was no longer visible in the monitor and the glass cage he was trapped in was broken apart, due to the island tipping over. After the party, the screen displaying Herbert was removed.

When Operation: Blackout started, part of the room was destroyed once again by Herbert. The entire tube transport was blown up, as well as various machines near it. Large chunks of cement were also dangling from the ceiling, and others were on the ground, some even lodged in machines. After the operation ended, the smoke cleared. A new channel was added to the monitor, before the others, displaying The Director, which read "THE ROAD AHEAD IS LONG. BUT THE EPF WILL RISE AGAIN."

On February 28, 2013, the room was filled with various crates and boxes. The hole where the transport was located was blocked by security tape. On April 4, 2013, one of the crates was replaced with a small station titled "THE LAB", which could be used during Operation: Hot Sauce, and the monitor received a different design. On May 9, 2013, more crates and boxes were added as well as large scaffolding where the tube transport used to be. The new Spy Drills feature was also added, in the monitor that used to be for Field-Ops.

On March 6, 2014, construction was finally completed, and the rebuild ended, with the entire room being completely redesigned. On June 11, 2015, PSA Secret Missions became playable from the station in the lower right corner, now titled "EPF Training Missions". On November 10, 2015, the EPF Handbook was added.

When all seats were occupied

With the lights out 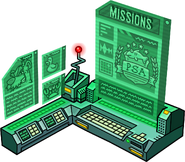 Concept Art for the elevator controls originally planned to appear in the EPF Command Room.

Concept art of an earlier version of the room.