The EPF Phone was an award in Club Penguin. All players could receive it when becoming an agent of the Elite Penguin Force. This was originally done by passing the EPF test in the Everyday Phoning Facility, and the phone was received upon entering the EPF Command Room after completing the test. After Operation: Blackout ended, until The EPF Rebuild ended in August 2013, the test malfunctioned upon attempting to start it, and players were simply granted access to the EPF Command Room after clicking on the telephone in the room and throwing a snowball at the target on the wall.

After the EPF was rebuilt, the phone was instead accessible by receiving it from The Director of the EPF in the Everyday Phoning Facility. All players could also obtain it by unlocking it with the code card included in the case of Club Penguin: Elite Penguin Force: Herbert's Revenge.

It was the successor to the Spy Phone, used by Penguin Secret Agency agents, and the Spy Gadget used by EPF agents in the EPF video games. When the EPF Phone was obtained, it replaced the Spy Phone if the player had one.

Although not displayed as a button on the screen, the gold EPF logo at the bottom allowed players to instantly teleport to the EPF Command Room if it was clicked.

The teleport feature from the old EPF Phone 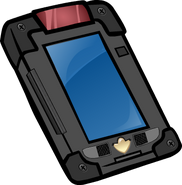 Artwork of the old EPF Phone

The upgraded version of the phone

These icons were never associated with any messages, but could appear in place of an intended icon as result of a glitch.