Electromagnets are devices that act as magnets when electricity runs through them. In Club Penguin, 3 types are known, all designed by Gary the Gadget Guy, and only used in secret missions.

The sketch on the blueprints has actually been changed. Originally, it included a coil with a wire going around it and connected to a battery. The new design features a magnet pulling a coin through a piece of cardboard.

In the HQ during secret missions, an Invention Cabinet is located next to the entrance to the Gadget Room. One of the inventions stored there is the Electromagnet 2000. In mission 7 the player uses it to retrieve the missing spring of the Clock Tower.

The wire is tied around the magnet. The battery is on top of the magnet, connected by a rubber band.

The Electromagnet 3000 (referred to as Magnet 3000 in mission 10) was first seen in the Case of the Missing Coins, where Herbert operates it at the Gift Shop Rooftop. He used it to pull all the coins in the Coin Vault to the ceiling, and the agents then need to destroy the electromagnet to release the coins.

In mission 6, blueprints of the invention can be seen in Herbert's Lair, and the player can return them to Gary in the end of the mission to win an award. In the end of mission 3, after the player tells Gary about the destroyed electromagnet, Gary says that it seemed familiar to him because he'd been working on a similar invention but its blueprints had been missing for some time.

In Waddle Squad, the same electromagnet is used to trap Herbert. The agents deploy it at the Gift Shop, and use its powerful magnetic range to pull a trap at the nearby Night Club towards the wall while Herbert stands between them, in order to capture him.

The long wire is tied onto the huge magnet and the two ends of the wire are connected to the Power Box. The pipe is stuck to the right side of the magnet. In Waddle Squad, a solar panel power unit is attached to power the electromagnet, instead of using the Powa Box. 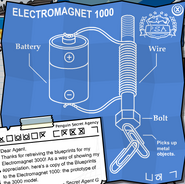 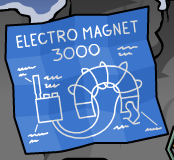 Electromagnet 3000's blueprints
Add a photo to this gallery

Retrieved from "https://clubpenguin.fandom.com/wiki/Electromagnets?oldid=1833642"
Community content is available under CC-BY-SA unless otherwise noted.