Elite Puffles are puffles that have been specially trained to assist agents of the Elite Penguin Force in their missions. Elite Puffles are trained by the Puffle Handler, and can be summoned by any agent that possesses a Puffle Whistle.

Each Elite Puffle has been trained to develop their favourite skill, usually one that reflects the attitudes of all puffles of that species. There are ten known Elite Puffles. 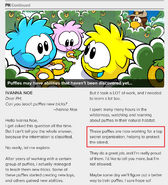 Elite Puffles referenced in issue #333 of the Club Penguin Times