Elsa was a character in Club Penguin who appeared at the Frozen Party. She is the queen of Arendelle[1] and sister of Anna.

Elsa has the magic ability to create and control ice and snow. Haunted by the moment her magic nearly killed her younger sister Anna, Elsa has isolated herself, devoting herself to suppress her growing powers. A stressful coronation causes her to accidentally set off an eternal winter.[1]

In the movie, she is the queen regnant of the kingdom of Arendelle. Elsa appears calm, reserved, regal and, unlike her sister, is experienced in grace and poise. She is shown to be compassionate, having cared strongly for Anna and, although she is the more mature and reserved of the two sisters, Elsa is shown to still be quite playful. However, ever since her magic nearly caused her sister's death, Elsa had lived in fear and trauma for a great amount of her life, too nervous to let her powers overdevelop. As a result, she chose isolation from everyone she cared about, including Anna, out of fear that she could hurt them and kept things to herself rather than communicate or be around anyone. 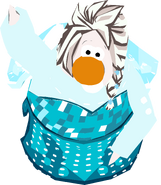 Elsa while performing in-game.
Add a photo to this gallery

Elsa3.png
Elsa as seen on the August 2014 Penguin Style cover.
ElsaCoronation.png
Elsa in her coronation outfit.
Add a photo to this gallery 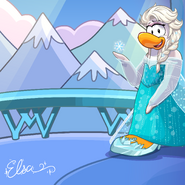 Elsa's Giveaway.
Add a photo to this gallery

Retrieved from "https://clubpenguin.fandom.com/wiki/Elsa?oldid=1482857"
Community content is available under CC-BY-SA unless otherwise noted.