The Enchanted Feather Pin was a pin in Club Penguin. It was hidden at the Beacon, and all players could obtain it. Owning this pin activated the bridge in the third and fourth showings of Secrets of the Bamboo Forest at the Stage, and allowed the player to obtain the Phoenix Queen's Background. 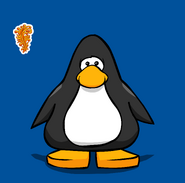 SWFEdit
Retrieved from "https://clubpenguin.fandom.com/wiki/Enchanted_Feather_Pin?oldid=1902840"
Community content is available under CC-BY-SA unless otherwise noted.