Epic Cannon was a hard difficulty stamp in Club Penguin, only available to be obtained by members. In order to obtain it, you had to build the Super Puffle Cannon in Puffle Launch, which requires collecting all the Puffle-O's in Blue Sky, Soda Sunset, and the Box Dimension. 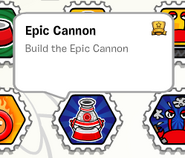 SWFEdit
Retrieved from "https://clubpenguin.fandom.com/wiki/Epic_Cannon_stamp?oldid=1873787"
Community content is available under CC-BY-SA unless otherwise noted.