The Everyday Phoning Facility was a building in Club Penguin, located at the Ski Village. It served as a cover for the Elite Penguin Force base, the EPF Command Room, under the guise of an office building. There were various desks with computers, and other various objects that would be seen in an average office.

The room was the cover for the Elite Penguin Force after the Penguin Secret Agency ceased operations. Originally, it was just a gray, empty room, with a lone phone booth and pillars in all four corners of the room, one of which opened up to reveal an elevator to the agency headquarters, and three others were part of a test. After the renovation of August 8, 2013, this room served as an office where penguins could work, and also as a phone directory service.

The Test was a challenge players had to complete in order to become an agent. It was active from when the facility opened in May 2010, until it was rebuilt in August 2013. If a player chose to take the test, they would be sent to a solo room identical in appearance to the Everyday Phoning Facility called 'The Facility'. After completion of the Test, it could have been replayed at any time. The Test was broken up into four categories.

During the Battle of Doom, as seen by EPF Agents

During the Battle of Doom, as seen by ordinary citizens

During the Holiday Party 2012

During the Waddle On Party
Add a photo to this gallery 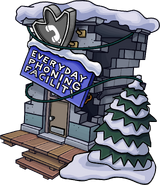 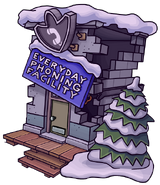 Holiday Party 2015
Add a photo to this gallery

The logo
Add a photo to this gallery

Retrieved from "https://clubpenguin.fandom.com/wiki/Everyday_Phoning_Facility?oldid=1906041"
Community content is available under CC-BY-SA unless otherwise noted.