Experimental Penguins (also referred to as Penguin Chat 1.0) was a game released on July 30, 2000, and closed in December 2000. It was Rsnail's first attempt at developing a multiplayer game[3]. It was later followed by Penguin Chat 2 and Penguin Chat 3 and served as part of the basis for what would eventually become Club Penguin several years later.

Information from the Experimental Penguins, Snowblasters, and Experimenting with Penguins posts from Rocketsnail's blog.

In 1999, after creating Ballistic Biscuit, Lance Priebe (aka Rocketsnail) had the idea to create a multiplayer game with penguins, named Snow Blasters. It would have featured gameplay similar to the Advance Wars series of video games, but centered around snowball fights. However, he did not have any experiencing creating a virtual world in Flash 4. He created Experimental Penguins as a small test, with only core features, such as chatting and a few rooms to explore. The game saw success that surprised Rsnail, averaging over 2000 players logging in daily. Due to the unforeseen traffic, Experimental Penguins was closed in December 2000, and Rsnail immediately began work on a better server.[2]

When entering the game, players were prompted to enter a name to join. Accounts did not exist. Players appeared as normal, blue penguins and were able to talk to other players, walk around, and change between one of three rooms: the Snow Room, the North Pole, and the Crash Site. Developers would ride in Snow Cats by default, and other players could also ride a Snow Cat by touching the pole in the North Pole room.

A penguin in a Snow Cat

The rocketsnail.com home screen when Experimental Penguins was available 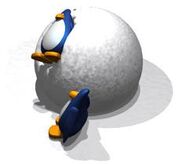 Experimental penguins and a snowball

A penguin with a santa hat 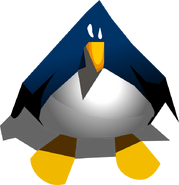 A close-up of the sprite

A penguin with a santa hat