The Fairy Branch was a magical slingshot-like tool that played an important role at the Medieval Party 2012. It was located at the Dock, and was described as being "enchanted with powerful magic".

With the "Spheres of Starlight" (described as being "made from pure starlight") that were located at the Beach, and "Cursed Stones" (described as being "cursed by Scorn") that were located at the Ski Village, it was used to defeat Scorn the Dragon King on top of the Mountain of Misery, which could not be accessed without obtaining it and the other two aforementioned magical items.

In the fight with Scorn, the Fairy Branch was used to hit the Spheres of Starlight, which damaged Scorn when enough were hit, with the Cursed Stones used as ammunition.

As seen on a login screen 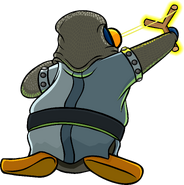 As seen on a login screen

As seen on a membership popup

Its location at the Dock during the Medieval Party 2012

The Fairy Branch in a sketch of the Lodge Attic
Add a photo to this gallery
Retrieved from "https://clubpenguin.fandom.com/wiki/Fairy_Branch?oldid=1891957"
Community content is available under CC-BY-SA unless otherwise noted.