Fairy Fables was a Stage play in Club Penguin. It first premiered at the Stage in November 2008 and since then, Fairy Fables had seven encores.

Once upon a time ... ... There lived a fairy storyteller called Twee - that's me! I live in a magical library where I tell no ordinary story tales. I like to mix things up a bit. It's a tale of twos you might say! So buckle up and get ready for the ride! This is the tale of a prince all dressed in red who goes riding though the forest to take some croissants to a princess with really long hair. I like to call it 'The Enchanted Forest'.

During the Penguin Play Awards 2009, Fairy Fables won the prize for Best Costumes.

During the Penguin Play Awards 2010, Fairy Fables was nominated for the categories and a special video was made promoting it. There were several lines for Twee and the Big Bad Wool set out in the script and many penguins believed it would win. It did not win any categories.

An advertisement for Fairy Fables from Club Penguin Times issue #221

The login screen for the January 2010 Fairy Fables

Another advertisement for Fairy Fables from Club Penguin Times issue #223 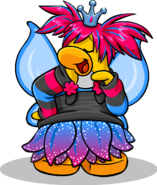 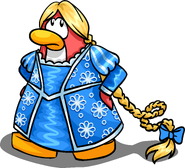