Please see this Wikipedia article for more information on the real life game.

Find Four was a two-player game located in the Ski Lodge and Lodge Attic. The goal of the game was to get four of your color chips in a row by dropping them into a grid from the top. This could be vertically, horizontally, or diagonally. This game was based on the real game "Connect Four". It used strategy and logic, therefore, no time limit was needed for each move. Find Four was originally only in the Lodge Attic but due to increase in popularity, more tables were added downstairs.[2] The winner of the match got 10 coins, while the loser got 5. In the rare event of a draw, both players got 5 coins. If one player quit, neither one would get coins.

In the comic Epic Encounter 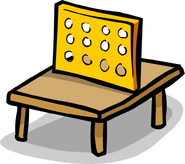 The original game board design

Penguins playing Find Four, as seen on the Coins for Change postcard
Add a photo to this gallery

Retrieved from "https://clubpenguin.fandom.com/wiki/Find_Four?oldid=1906050"
Community content is available under CC-BY-SA unless otherwise noted.