The Fire Suit was a clothing set comprised of four items, respectively, the Flame Sandals, Magma Coat, Lava Mask, and Fiery Helmet. It could only have been obtained by playing the game Card-Jitsu Fire.

If you danced with your full suit on, you would produce fire with your flippers. When you waved, you would disappear (like the Cloud Wave Bracelets, but with fire). The Fire Amulet did not have to be worn with the suit.

To earn the Fire Suit, you had to play against other penguins, many times, in Card-Jitsu Fire by being the last one standing, meaning you needed to get your opponent(s) down to 0 energy. After you win a couple of times, Sensei would reward you with parts of the Fire Suit; first the Flame Sandals, then the Magma Coat, next the Lava Mask, and finally the Fiery Helmet. Then you could challenge Sensei in a battle, and become a Fire Ninja if you beat him and earn the Fire Gem on your Amulet. 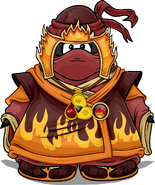 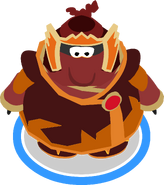 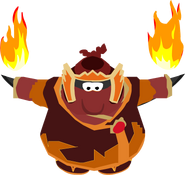 The New Fire Suit Chart, showing all the pieces from top to bottom you need to obtain
Add a photo to this gallery
Retrieved from "https://clubpenguin.fandom.com/wiki/Fire_Suit?oldid=1873947"
Community content is available under CC-BY-SA unless otherwise noted.