In the online Club Penguin, Flare can be unlocked using a code included in any of these DS games. Players can then summon Flare at any time and walk him, similar to walking a puffle, although in the game he nehaves as a normal Hand Item, rather than an actual living Puffle.

He was originally called Strong, but went through a name change before being released onto Club Penguin.

Like most Black Puffles, Flare has the ability to light itself on fire; however Flare can concentrate this fire and shoot it from his mouth. Flare would use this to effectively weld items throughout the two DS games.

It is possible to unlock Flare using a code from Club Penguin: Elite Penguin Force: Herbert's Revenge, or via the EPF Trading Card game. Flare can then be walked through the Puffle Whistle in the Hand Items section of the inventory or through the EPF Phone. 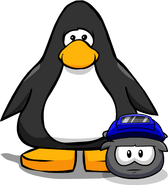 Flare on a Player Card. 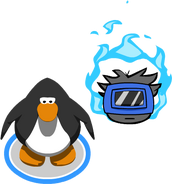 A penguin dancing with Flare.

A penguin sitting with Flare.

Flare after its owner waves.
Add a photo to this gallery 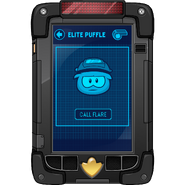 The Elite Puffle menu in the EPF Phone. It can be called after entering the code from Herbert's Revenge.

Flare appearing in Card-Jitsu after its power card is played.

Appearing on the Home Screen alongside other puffles after Puffle Trouble was first shown.

Flare description at a poster.
Add a photo to this gallery

Retrieved from "https://clubpenguin.fandom.com/wiki/Flare?oldid=1765267"
Community content is available under CC-BY-SA unless otherwise noted.