Not much is known about the Flare Flinger 3000, apart from the fact that if you clicked on it, it loaded itself, and shot blasts of orange and red flares to signal Rockhopper.

During Save the Migrator Project 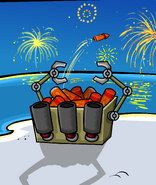 The Flare Flinger 3000 card
Add a photo to this gallery

Retrieved from "https://clubpenguin.fandom.com/wiki/Flare_Flinger_3000?oldid=1906054"
Community content is available under CC-BY-SA unless otherwise noted.