Fluffy the Fish (a.k.a. Yellow Fish) were small yellow fish who were also recurring characters that appeared in games, missions, rooms, and even on the main currency, the coin, throughout Club Penguin.

Fluffy the Fish was a game for Club Penguin's Beta Team game testers. It was a fun mini-game where the player controlled a Fluffy to eat the smaller fish, thus growing in size after eating so many. The player could use the arrow keys and mouse.

The "Fish Clock", as seen on issue 71 of the Club Penguin Times

A picture of Fluffy the Fish from the Lighthouse

As seen in Ice Fishing

As seen in Bean Counters 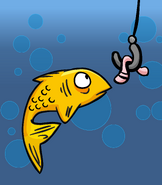 As seen on the Card-Jitsu Card FLUFFY THE FISH

Fluffy cloud made by the Cloud Maker 3000 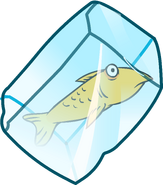 Fluffy frozen in a block of ice, as seen floating past the windows of the Underground Pool during the Christmas Party 2008 and Holiday Party 2016 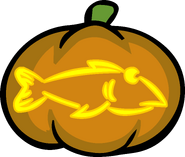 Pumpkin carving of Fluffy, as seen floating past the windows of the Underground Pool during Halloween Parties 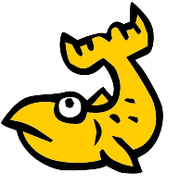 As seen in issue #167 of the Club Penguin Times

As seen in the Stadium 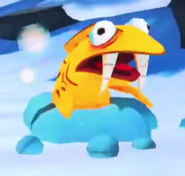 A sabre-tooth Fluffy in Sled Racer

A statue of Fluffy as seen at The 13th Floor 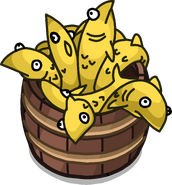 A Pirate Barrel full of Fluffies

As seen on a coin