The Forest was an area on Club Penguin Island, filled with a variety of trees and rocks. While not as large as the Wilderness, which filled a large portion of the northern side of the island, the Forest was rather sizable.

The Forest connected to the Plaza from the west, the Mine Shack from the north, and the Cove to the southeast, via a set of stairs. The Hidden Lake was located directly beneath the Forest. The Forest also often served host to party rooms.

The Forest was not initially accessible when the Plaza opened. One day in early May 2007, a penguin was playing Jet Pack Adventure and miscalculated his landing. He ended up in the Forest, which was previously uncharted. He made a map of this area and an uninhabited beach, but lost the map when leaving. After this, from May 18 to May 25, 2007, players could find the lost map. Once a player had the map, they could access the Forest by walking behind the Tour Booth at the Plaza. At this time, construction was underway to make stairs for the Cove. A week later, the stairs were completed.

After plans were made to remodel the Mine Shack in April 2010, a path was made to connect to the Mine Shack. A few months later, after the Island Adventure Party 2010 ended, a ladder, covered by a boulder, was added to access the Hidden Lake.

As part of The Journey, the Forest was renovated on January 23, 2014. For the most part, updates were simply graphical. Aside from graphical changes, a rock formation with a small opening and a waterfall were added, and some hollowed out tree trunks were located nearby.

According to Gary the Gadget Guy, the Forest was changed due to a result of changes in the past from the Prehistoric Party 2014.

During the construction of the Cove

After the Cove Opening Party

The Fair 2012, after more prizes were added

The following are from the Adventure Party. The colors of the flowers changed depending on what color the majority of penguins in the room were.

The Forest as seen on the map 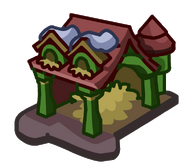 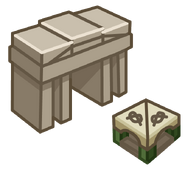 Early concept art of the room