This Forum has been archived

Yellow Puffles were once a rumor in Club Penguin.

The rumor was started when the library book, Penguin Tales 2007, was released. It included a story known as, "The Legend of the Golden Puffle", which sparked the controversy. In the story, a penguin that is mining for gold finds a supposedly "Golden" puffle and takes it to The Penguin Times, which makes it the head article for the next newspaper. The owner of the puffle reads the article and goes to The Penguin Times, telling the manager that the gold puffle was actually a blue puffle in yellow paint.

As of November 30th, 2007 Yellow Puffles are now adoptable in the Pet Shop, but only members can get them.

The yellow puffle at the Plaza.

The yellow puffle on the Mountain. 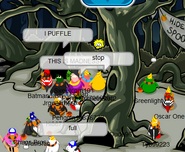 The yellow puffle in the Forest during the 2007 Halloween Party.

Yellow puffle at The Stage.

Yellow puffle at The Stage.

A Real Yellow puffle.
Add a photo to this gallery

Retrieved from "https://clubpenguin.fandom.com/wiki/Forum:Yellow_Puffle?oldid=1891237"
Community content is available under CC-BY-SA unless otherwise noted.