Fozzie Bear is a very nervous comedian. Every time he tries to tell a joke, he will either mess it up or the audience won't laugh. He has stage fright sometimes but overcomes it every time. Fozzie always gets heckled by Statler and Waldorf, two old men who sit in a balcony and heckle The Muppets.

Fozzie appears in the Day 1 act of the Muppets World Tour on March 20. He was stationed in Germany (the Forest). Fozzie teaches penguins to master the art of pie throwing. You equip the Cream Pie and complete the performance, where Fozzie then gives you the Alpine Hat.

In WaddleOn with The Muppets, Fozzie is one of the main characters. He and Kermit are having tea and "trumpets" in England when a Goldsmith Force member steals the Golden Anvil from the Museum. Fozzie and Kermit have to chase him all around the world, doing things such as riding an out-of-control airplane and encountering other Muppets along the way. Finally, they catch up to the thief in the United States. He fixes Fozzie and Kermit is friendship after they have had a fight. The thief reveals himself to be the Golden Anvil all along. Fozzie and Kermit then take him to the Muppet Theater for a party, which causes the anvil to go back to the Museum. 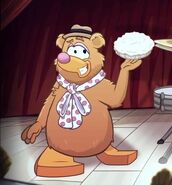 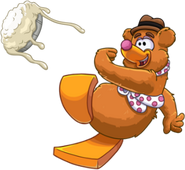 Add a photo to this gallery
Retrieved from "https://clubpenguin.fandom.com/wiki/Fozzie_Bear?oldid=1714359"
Community content is available under CC-BY-SA unless otherwise noted.