Fragile Things Inc. was a series of stores and workshops, seen during some events in Club Penguin. As its name suggested, they specialized in fragile things, such as china sets, crystals and gems, sculptures and other products. It first made an appearance at the Snow Forts during the Marvel Super Hero Takeover 2013, and made a second appearance at the Puffle Berry Mall, during the School & Skate Party. It returned with the Mall for the Merry Walrus Party. As of June 4, 2015, it could be seen permanently at the Mall. 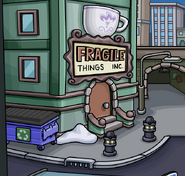 At the Snow Forts during the Marvel Super Hero Takeover 2013 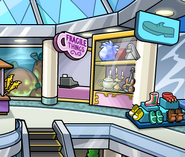 Inside the Puffle Berry Mall during the School & Skate Party 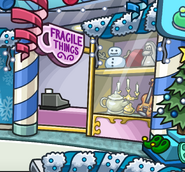 At the Mall during the Merry Walrus Party 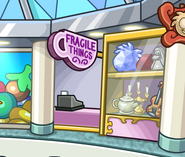 At the Mall when it became a permanent room