Franky's First Show is a book in Club Penguin that can be found in the Book Room's Book Shelf. The book features Franky, one of the Penguin Band's guitarists, and his stage fright during his first show together with the rest of the band.

I awoke that day with a start. "Today is THE day," I said to myself. I chose my outfit and headed out the door into the crisp air to face the day.

A dizzying buzz filled the air. The Western Party was only hours away from kicking up dust. Penguins everywhere were jittery with excitement.

I was the only one shaking in my boots. Nerves never did seem to get to G-Billy, Stompin` Bob, and Petey K. They were filling up on fish pizzas.

However, my nerves were too busy turning my stomach into knots to enjoy eating. It was the furtherest thing from my mind.

The day of my first show as a guitarist with the band had arrived. Just a week ago I was giddy with excitement.

A lot changes in a week. Now all I could do was shake in my boots and try to undo the knots in my stomach. Stage fright can really throw a wrench into a good time.

The Night Club was filling up with penguins hoping for a flipper-stomping good time of dancing with the return of the Penguin Band. I stood backstage, amazed at the size of the crowd.

The rest of the band returned from their pre-show of fish pizza, excited to get things rolling.

"C'mon Franky, it`s time to rock the house", Stompin' Bob said to me as headed out on stage. 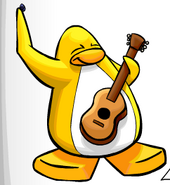 Retrieved from "https://clubpenguin.fandom.com/wiki/Franky%27s_First_Show?oldid=1891127"
Community content is available under CC-BY-SA unless otherwise noted.