Fred the Clockwork Cuckoo, or otherwise simply known as Fred, was the clockwork bird that emerged from inside the cuckoo clock every half an hour in the Ski Lodge. His name first appeared in The Penguin Times issue #87, but he had existed before The Penguin Times announced his name.

He was featured in the Paint by Letters book, Burnt Out Bulbs if you pulled the right silver feather under the Cuckoo Clock. Then Fred would jump out with a coin in his mouth. You had to be fast enough to click the coin. Sometimes, it took a while to get it from him, considering Fred jumps out, then back in, quickly. This was not possible now due to the removal of the game in 2012. 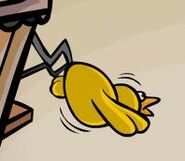 As seen in issue #126 of the Club Penguin Times

Fred coming out of the clock 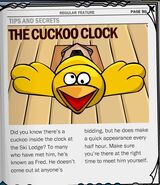 An article about Fred in issue #87 of The Penguin Times

Fred in the Paint by Letters book "Burnt Out Bulbs." 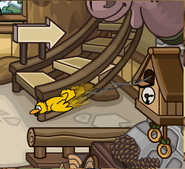 New Fred coming out of the clock
Community content is available under CC-BY-SA unless otherwise noted.
Advertisement