The Friends List, (also known as the "Buddy List"), was a feature in Club Penguin, accessible through the toolbar, that provided a list of all the confirmed friends a player had, as well as allowing to send friend requests.

A list of all the friends a player has. Penguins that appeared here either confirmed a friend request sent by the given player, or sent one to the player that the player in turn confirmed. A player can have a total of 500 friends.

Friends are sorted alphabetically. Each friend is displayed as a square image of that player's player card upon their last log off, and their name in the bottom; a small badge in the upper-left allowed marking/unmarking a friend as a "best friend", which will pin them to the top of the Friends List. Offline friends' image are marked with a dark blue shadow, while online friends are automatically pinned to the top.

Clicking a friend in the list will open their player card, which, in turn, provides further options, such as removing the friend, sending a postcard, going to their igloo and so on.

The bottom of the Friends List included a search field, which allows searching for any player in Club Penguin. If the searched player was found and they are not in the current player's friend list, they would appear in a box marked with "+ Add Friend", which will send them a friend request upon clicking.

Names of certain players, however, are not processed, and instead return a special message in the client-side.

Except for the Friends List itself, befriending another player unlocks some additional features:

After October 28, 2011 update, it became possible to search for offline penguins. However, searching for a famous penguin displays a small monologue preventing you from sending them a friend request. The only way to add a famous penguin as a friend is to meet him on the island. When added, famous penguins will be at the bottom of the friends list, clicking on their image opens their player card. Players may not mark a famous penguin as a best friend or be notified what room they are in or what server they currently are.

On October 28, 2011, the friends list got a major update. Beforehand, it was essentially a small window with 3 tabs:

Trying to add Billybob with the new friends list

Trying to add Happy77 with the new friends list 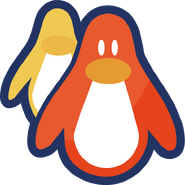 The icon of the friends list in the toolbar

A glitch that shows the player in their friends list

A common glitch where no buddies are displayed

The Add and Remove Friends buttons

The button to find a buddy

The button to visit another user's igloo

The button to ignore another user

The animation of a friend request sending 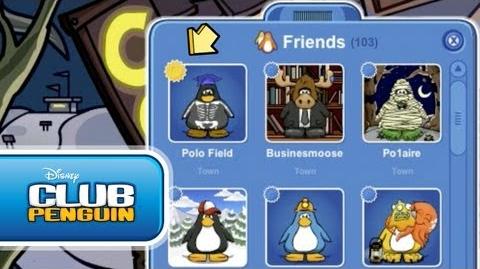