If you put fur in the machine, a "loading" message would appear on the screen. After that, it would show an "analyzing" message and then show information about the subject, such as:

If something was wrong with the fur you put in, it would not work and it would analyze the evidence a second time.

During loading, there would be different messages in the Secret Code. The messages would change each time a piece of fur was entered into the machine. The translation can be found below. Although there was no punctuation in the in-game code, it has been added to make sense of the code. 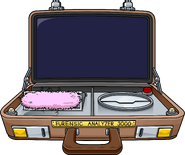 An empty screen with some Pink Puffle fur

When you untangled the Pink Puffle fur

"This text is completely random. If you can read this I am very impressed. Good job agent." as seen in Tic Tac Code
Add a photo to this gallery

Retrieved from "https://clubpenguin.fandom.com/wiki/Furensic_Analyzer_3000?oldid=1906070"
Community content is available under CC-BY-SA unless otherwise noted.