The Gadget Room is a room in Club Penguin located in the HQ. It can only be accessed in the EPF Training Missions. The original room was destroyed in the Popcorn Explosion.,

It was confirmed in the Club Penguin Magazine Issue 26 comic "Lost In Time" that it had been rebuilt as part of the new EPF Command Room.

Agents were first introduced to the Gadget Room in PSA Mission 4: Avalanche Rescue, and it has been used in almost every mission since. In its first appearance, you must ask G to unlock it using the eye scanner. This suggests that it was a very secret room that only a select few agents could enter.

The PSA Gadget Room was destroyed in The Veggie Villain during the Popcorn Explosion.

Despite being destroyed, the room was seen in the Club Penguin Times issue #390 and a recent Reviewed by You after the explosion, suggesting that it survived. It also appeared on Gary's playercard in 2014.

The Club Penguin Magazine comic "Lost In Time" confirms that the Gadget Room was rebuilt along with the new EPF Command Room. The door appears similar to the PSA door. Also like the PSA version, the door appears to be on the wall that the player cannot see online.

One wall of the room appears similar to its PSA counterpart; this is the wall that is seen on Gary's playercard and in the newspaper.

As its name suggests, the main purpose of the room was to store dangerous prototypes of gadgets invented by Gary. Some of these include the Prototype Sled, the Thingamabob and the Thingamajig, the Crab Translator 3000, Jet Packs, a prototype of the Aqua Grabber 3000 and the Spy Phone, and many more silly, useless, and downright strange inventions.

The Wheel Bot from the Gadget Room 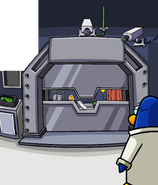 As seen in PSA Mission 4: Avalanche Rescue
Add a photo to this gallery 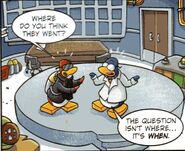 As seen in issue 26 of the Club Penguin Magazine

The main entrance in "Lost In Time"

"Lost In Time", where the room can be seen
Add a photo to this gallery

Mission 11
Add a photo to this gallery

Retrieved from "https://clubpenguin.fandom.com/wiki/Gadget_Room?oldid=1906080"
Community content is available under CC-BY-SA unless otherwise noted.