Game Upgrades were a series of catalogs featured in several rooms that had (as its name explicitly said) upgrades for various games. The catalogs offered clothing items that allowed the player to take them to certain games and interact with them.
The first Game Upgrades were released in 2009 for three games, and more have been released since.

The catalogs were accessible either via an icon on the bottom-left corner of the room, or by clicking a label of the catalog that was found somewhere in the room.

The DJ3K catalog at the Night Club 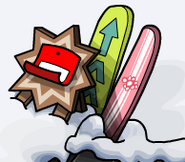 The catalog at the Dock

Retrieved from "https://clubpenguin.fandom.com/wiki/Game_Upgrades?oldid=1905838"
Community content is available under CC-BY-SA unless otherwise noted.