Garianna was a witch who lived during the Medieval Times. She was a relative of Gary the Gadget Guy, Gariwald VIII, Garugg the Ugg Ugg and Gary 3000. She was a witch who made magical potions that gave the ability of transformation to Penguins. Her existence was unknown to Gary until Rockhopper found and gave her Magical Book to him prior to the Medieval Party 2013. This inspired Gary to turn the School into a wizardry school to teach penguins wizardry and spells.

In Medieval times, Garianna created and executed spells that could transform her fellow penguins. She wrote these potion formulas down in her spell book, which in the course of unknown events ended up on a mysterious island.

Garianna also had some connection to puffles, writing pages similar to the Puffle Handbook, which described how one should care for a gold puffle, as well as how to find one. This implies that she had some similar role as PH in addition to having the inventing ancestry of Gary's family. 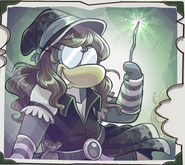 The photo in the back of Garianna's book

The back page of Garianna's potion book

The puffle seen in the photo with Garianna

Information on the Whats New Blog

Garianna with no color
Community content is available under CC-BY-SA unless otherwise noted.
Advertisement