Gariwald VIII is rich, as he owns a large mansion built by himself. Gariwald also owned a puffle, and while its color is unconfirmed, it has been passively mentioned that it may be a gray puffle.[1]

Gariwald VIII was born some long time ago, a descendant of Garugg the Ugg Ugg. His brother or sister soon had children, and one of those children had a son, Gary the Gadget Guy, making Gariwald Club Penguin's resident inventor's great uncle. Gariwald built a mansion for himself. He built a Ghost Lab to experiment and researched ectoplasmic phenomena (in other words, ghosts). He ended up going missing inside of his mansion on Halloween night. Because of this incident, the mansion was deemed haunted.

The mansion was discovered by Gary the Gadget Guy and his group of ghost hunters in October 2012, who entered his great uncle's mansion to hunt for ghosts. Gary the Gadget Guy looked for clues about his great uncle and why he mysteriously vanished into thin air. It was soon discovered, however, that Gariwald VIII turned himself into a ghost with his Ghostamatron 3000. Soon after, the mansion disappeared again, along with Gariwald.

In October 2014, Gariwald finally came back to visit Club Penguin Island. He went to investigate strange happenings inside the Puffle Hotel. Eventually, though, when he was inside searching, the shapeshifting ghost Skip kidnapped him. Penguins then went to find him and discovered Skip's plan to capture Ghost Puffles and use their energy to haunt the island. However, Skip was defeated and Gariwald was finally freed. 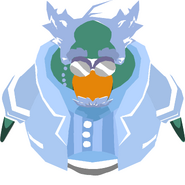 His sprite during the Halloween Party 2014

His in-game sprite in the Ghost Lab

His original pose in his portrait 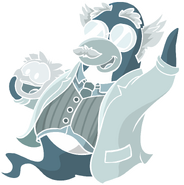 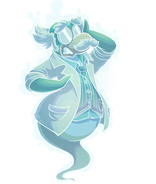 A portrait of Gariwald found at the Lodge Attic 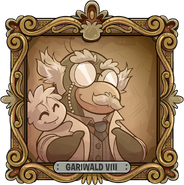 Gariwald's cameo at the Puffle Party 2015