Gary 3000 is an inventor from the future. He is described as "Gary in the future but different". Similar to how Gary the Gadget Guy is an agent in the Elite Penguin Force, Gary 3000 is part of the Extra-Planetary Federation, a future agency similar to the EPF.[1]

He was found in the year 4014[2] during the Future Party by players who used the Time Portal. This suggests that Gary will live for over 2 millenniums ( a present day perspective). This idea is confirmed in issue #499 of the Club Penguin Times where Gary states "I met Gary 3000 who is me in the future but different."

In the future, his inventions are used all over the galaxy. He invented the Robos for the Extra-Planetary Federation, which are walking robot suits that allow penguins to "fly into orbit" to "defend against threats from outer space and other dimensions". He also made Space Cadet Jetpacks for similar usage. 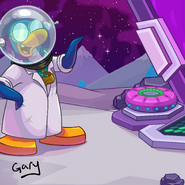