Gary the Gadget Guy, also known as Gary or G, is Club Penguin's local inventor and the former owner of the Sports Shop. He almost always appears in a white lab coat and his special curved spectacles.

Gary has gone through large amounts of character development and personality changes. Throughout his history, he has been smart and very helpful to most penguins on the island. When he made his debut as a mascot at the Halloween Party 2008, he appeared quiet and imaginative. He is very easily frightened as shown by his scripts during the Halloween Parties, and he used to be somewhat shy and potentially claustrophobic, as he often expressed his dislike for crowds, and would go so far as to run away from penguins that would crowd around him during meetups. However, as of the My Penguin Release Party, he's stated that he's not very shy anymore. and feels more comfortable around large crowds.

After being kidnapped and cryogenically frozen during Operation Blackout, he seemed to act more unusual and nervous and admitted that he was feeling a little strange, thinking that perhaps the cryogenic process could have been unstable, and effected his cerebral cortex. As of the Medieval Party 2013, he seemed to be back to his old self again.

He was briefly given an English background via his speaking mannerisms in the Club Penguin Times, although this seemed to have been abandoned later on, and he was depicted with an American accent in Club Penguin: Halloween Panic!.

He is known to enjoy eating Fish pizza with extra cheese and anchovies, and is known to be an avid consumer of Coffee, and was often seen drinking it while in the HQ.

Gary has been making inventions since the first day of Club Penguin. Many of his inventions are around the Island for use by normal penguins, while some were kept in the Gadget Room, like the Test Chamber and the Crab Translator 3000. Gary ends most of his inventions with a number like 1000 or 3000 (mainly 3000). It was revealed in Issue 16 of the Club Penguin Magazine that he has 2999 other versions that go wrong and that the 3000th version is always the completed version. It is probable that his projects receive copious funding from the EPF, since Gary would be unable to afford all required components without some source of financial support. Many of Gary's inventions have been proven as failures, such as the Ski Lift 1000, therefore suggesting that his inventing skill is not as good as he lets on, although this may just be because the failures are always prototypes, and the final '3000' always works fine.

Role in the Penguin Secret Agency and Elite Penguin Force

Gary is the lead scientist and inventor for the both the PSA and the EPF. When he appeared in Mission 2, he was depicted as a somewhat slick and suave scientist who owns the Sport Shop. In later PSA missions, he morphs into more of a leader and technical personality, and becomes more partner-like than superior towards the last secret missions, and in the EPF (although he issues orders and missions), he appears as more of a team member like Jet Pack Guy and Rookie.

Gary's role in the EPF seems to be secondary to his role being a mascot, shown particularly during Halloween Party 2012. It is also to be noted that Gary never once made any indication of the existence of the EPF during the PSA Era, outside of Club Penguin: Elite Penguin Force.

Relationship to the Director

Gary is not the Director of the EPF. This was proven during Operation: Blackout, when the Director was revealed to be Aunt Arctic. G was the only known agent who was aware of her identity prior to this event.

Gary has designed nearly all PSA (and later EPF) field equipment, including the Spy Phone, and the I.S.E.E.U.. Gary often creates inventions with specific uses for certain missions, such as the Mini-AC 3000 for Operation: Hibernation. Gary created inventions originally in his room, then in the Gadget Room, and later in his lab.

Ever since Gary's great uncle made his first appearance at the Halloween Party 2012, it has become a running gag that one of Gary's ancestors were somehow involved in the plot of each party that Gary is present at. Some examples are Garugg the Ugg Ugg at the Prehistoric Party 2014 and Garianna mentioned prior to the Medieval Party 2013. During the Future Party, Gary meets his future self, Gary 3000. In issue #377 of the Club Penguin Times, he stated that he has many family members, including cousins, uncles and an aunt (not Aunt Arctic). Most of them are possibly shy.

Relationships To Other Mascots

Gary helped Rockhopper upgrade The Migrator for Rockhopper's Quest. The two had never met before the end of the Save the Migrator Project, according to the Club Penguin Times.

Appearances as a Mascot

Gary normally appears two to three times a year, making him a moderately difficult mascot to locate. Upon finding him, players can receive his background and add him to their friends list.

Gary normally gives out a new background on his every visit.

Gary has a collection of Club Penguin items that he has in his inventory, which are listed below. 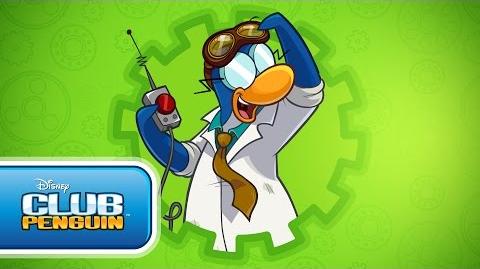 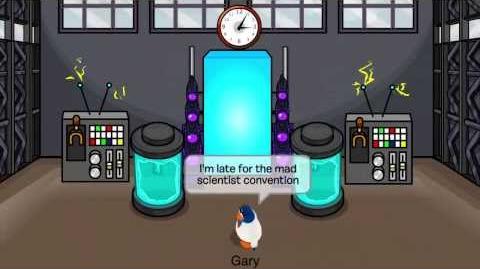 Waddle On With Gary