Get the Worm was a medium difficulty stamp in Club Penguin, only available to be obtained by members. In order to obtain this stamp, the player has to hit the top of the far right cave in Soda Seas, pick up the worm, and drop it into their net. 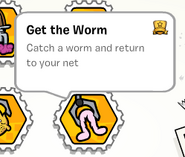 SWFEdit
Retrieved from "https://clubpenguin.fandom.com/wiki/Get_the_Worm_stamp?oldid=1874240"
Community content is available under CC-BY-SA unless otherwise noted.