Following their inhabitation of the Puffle Hotel on October 16, 2014 and the investigation of Gariwald VIII the Ghost Puffle's colonies began to attract the attention of penguins and malevolent ghosts alike. A ghost who began masquerading as a penguin called Skip fooled the penguins into rounding up the numerous ghost puffles around the hotel (who were supposedly haunting it) by instructing them to collect machine parts. After the machine was assembled, the ghost puffles were vacuumed into a large container and were siphoned of their power by the puppet-master ghost.

However, after one penguin combated the ghost's trap and display of power the ghost puffles were set free around the island; safe and free for penguins to begin adoption.

On November 5, 2014 Ghost Puffles became unavailable following the end of the Halloween Party 2014.

On October 21, 2015 Ghost Puffles became available again for the Halloween Party 2015. Members could adopt them at the Dock.

On November 4, 2015 Ghost Puffles became unavailable following the end of the Halloween Party 2015.

On March 16, Ghost Puffles became available once again for Puffle Party 2016. They are also featured in the daily quest as part of the Hide-N-Seek quest. 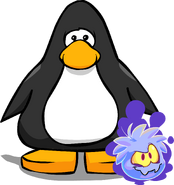 A Ghost Puffle on a Player Card

As seen in the Login Screen during Halloween Party 2014

The Ghost Puffle's look on the Player card 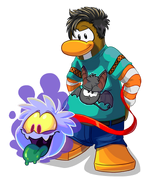 A Penguin walking a Ghost Puffle 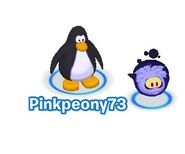 Walking a Ghost Puffle on the Club Penguin App 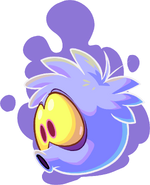 As seen on the homepage 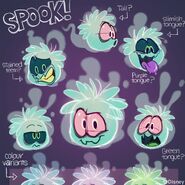