Club Penguin Wiki
Register
Don't have an account?
Sign In
Advertisement
in: Characters, Creatures, Squid and Octopi,
and 2 more

The Giant Squid appeared in the background of Aqua Grabber but did nothing of significance in the game.

The squid was found in level one but it was very hard to find. When it did appear, the screen would start to shake; then the squid would appear from behind a rock wall. It appeared as a shadow (because the water from where it lives in real life is dark). It would then start to turn itself clockwise and stop when the top of its head is pointing to the left; then it starts to roar. After a few seconds, it suddenly zooms away.

It originally had a startling roar to alert penguins of its presence, but the sound was later removed due to some children being terrified by it.

In Puffle Rescue, the Giant Squid was the dark shadow that penguins could use to find the entrance to the Underwater room. However, after the player got the Moss Key, the Giant Squid could no longer be spotted in this game.

It appeared in the first Black Puffle level, when the penguin had rescued the Black Puffle but not taken it back to the start. It would swim by with a trail of bubbles and the penguin had to use those bubbles to go after the squid until it reached a coral reef. On the reef the penguin could stop following it and go to a staircase which led to the Underwater room.

The Giant Squid in Puffle Rescue swam a lot slower and gentler, unlike the squid in Aqua Grabber. This led some to believe that there was more than one Giant Squid in Club Penguin.

During the Island Adventure Party 2010, the Giant Squid could be seen at the Iceberg, surrounding it. It appeared every 15 minutes.

During the Island Adventure Party 2011, the Giant Squid was found at the Iceberg. After feeding it with fish, it would let players receive the Telescope Pin.

Rockhopper vs. the Giant Squid 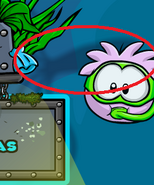 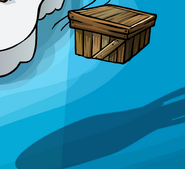 The Giant Squid swimming away

A better view of the Giant Squid's head

The Giant Squid playing with his ball 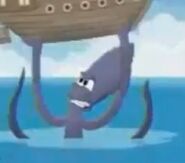 The Giant Squid holding up the Migrator 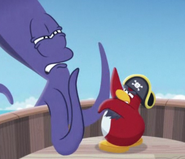 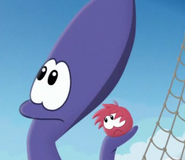 As seen in Anchors Aweigh

The bulletin board with the picture of the squid in the Lodge Attic
Community content is available under CC-BY-SA unless otherwise noted.
Advertisement