The Gift Shop Computer is the computer located in the Gift Shop Manager's Room. It contains:

All of which can be found on a floppy disk, underneath the couch in the Gift Shop Manager's room.

The computer's operating system is Penguin Operating System 2.0 or Penguin OS 2.0, which is a DOS. It looks like a Windows '98 or a Mac System 6 system. The logo also resembles Tux, the Linux mascot. The only game available is Ice Bricks. 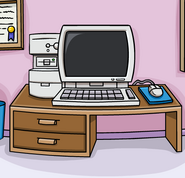 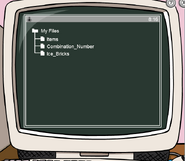 The desktop of the computer 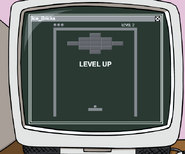 Ice Bricks gameplay on the computer 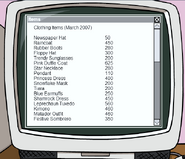 The item prices (Penguin Style - March 2007) database on the computer 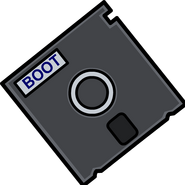 The Boot Disk for the computer. Resembles an 8-inch floppy disk

Retrieved from "https://clubpenguin.fandom.com/wiki/Gift_Shop_Computer?oldid=1906085"
Community content is available under CC-BY-SA unless otherwise noted.