The Gift from Dot was an award in Club Penguin. It could have been obtained by completing the secret task of PSA Mission 11: The Veggie Villain. In order to obtain it, the player had to assist the Dancing Penguin, who accidentally broke his glasses. To repair them, the player had to use a can of worms from the Lighthouse, then take it to the Gadget Room, and place it in the Test Chamber. The can had to be then filled with water, then frozen. The ice would fall out of the can, allowing the player to pick it up. Then, it had to be taken to the Beacon, where Rory was attempting to fix the telescope, which had broken glass. After giving him the ice, he gave the player the glass. Then the player had to use it to place in the Dancing Penguin's glasses. 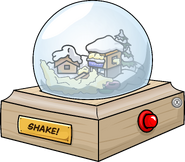 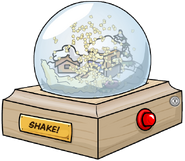 While open, with the Spy Goggles

While open, without the Spy Goggles
Add a photo to this gallery

Russian full award, open
Add a photo to this gallery

SWFEdit
Retrieved from "https://clubpenguin.fandom.com/wiki/Gift_from_Dot?oldid=1874278"
Community content is available under CC-BY-SA unless otherwise noted.