The Gigantic St. Patrick's Hat was a head item in Club Penguin. All players could obtain it for free at the Ski Village during the St. Patrick's Day Party 2008, or at the Mine Shack during the Puffle Party 2012. It also cost 100 coins in the Penguin Style catalog, and only members could buy it. 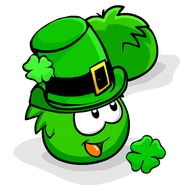 As seen in issue 179 of the Club Penguin Times

As seen on the St Patrick's Day postcard, along with the Green Bowtie
Add a photo to this gallery

Retrieved from "https://clubpenguin.fandom.com/wiki/Gigantic_St._Patrick%27s_Hat?oldid=1874279"
Community content is available under CC-BY-SA unless otherwise noted.