Goalie was an extreme difficulty stamp in Club Penguin. In order to obtain this stamp, the player had to win a game of Goal!, without letting a puck in their net in Club Penguin: Game Day! 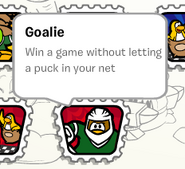 SWFEdit
Retrieved from "https://clubpenguin.fandom.com/wiki/Goalie_stamp?oldid=1874329"
Community content is available under CC-BY-SA unless otherwise noted.