The Gold Puffle (also known as the Golden Puffle) was a puffle in Club Penguin. They were released on November 14, 2013, just before Operation: Puffle.

The legendary gold puffles live near gold deposits in the earth’s crust. They are known to dig up rare golden items.

There is only one famous Gold Puffle:

Back in medieval times, Gold Puffles were studied by the medieval witch Garianna, who owned one of these elusive beasts during her life, and wrote in the aforementioned sheets of paper instructions about how to find and take care of one. Because of her writings, Puffle Handler discovered that the seeds of the Golden O' Berries could be related to the puffles in some way.

After the November 2013 tremors and the renovation of the Gold Mine, penguins set to work to find the golden puffles after first discovering some of Garriana's pages deep underground.

Shortly after the definitive revelation of the Gold Puffles, Operation: Puffle was launched and they could use their treasure-attracting powers to help penguins during Puffle Chase and help them recover unusual golden items.

Legend of the Gold Puffle

In the fan made The Legend of the Gold Puffle story from the book Penguin Tales: Spring '07, a penguin believes he has found a Gold Puffle, but it ends up being a Blue Puffle wearing gold paint.

Quest for the Golden Puffle

A fake gold puffle statue is an important piece of the PSA Mission Waddle Squad. The plan was to use the gold puffle as bait for a trap on Dance Club. Herbert tries to steal the fake gold puffle and the PSA, as planned, capture him. Unfortunately, Rookie accidentally gives his spy phone to Herbert, letting him escape. As revealed by Gary in Waddle Squad, this statue was in fact buried in the Mine, were it was discovered by workers working there. This may have to do with the real Gold Puffle discovery in the same place years later.

In later missions, the fake gold puffle can be seen in the Invention Cabinet of PSA HQ. It may have been destroyed during the Popcorn Explosion.

Garianna was the only penguin to have owned a Gold Puffle. It appears on the last page in her Potion book. She might have owned it, which means they might have lived during those times. Also, the secret potion ingredient was a Golden O-Berry. A Gold Puffle statue was seen at the Lighthouse during the Medieval Party 2012, and at the Wizard Library during the Medieval Party 2013.

Poking at the Gold Puffle mystery, in the Coffee Shop during the 8th Anniversary Party a slab of gold with a puffle etched into it could be seen on display, as the Coffee Shop was temporarily changed into a museum of Club Penguin History.

On October 30, 2013, Polo Field made a post on the What's New Blog, featuring a mysterious puffle picture with a question mark.[1] It could be the Gold Puffle or something related to the upcoming Operation: Puffle.

On November 1, the membership page was updated with a picture of the Gold Puffle, saying that they could dig for super rare treasures via Puffle Digging. The Quest for the Gold Puffle began on November 14, 2013.

In the Puffle Interface

A Gold Puffle after being brushed

While taking a bath

A Gold Puffle digging an item

Hungry
Add a photo to this gallery

The Golden Puffle used as bait in Mission 10

The Golden Puffle in the Invention Cabinet

The statue in Quest for the Golden Puffle

The Gold Mine during the Quest for the Gold Puffle

The logo that appears on ads for the Gold Puffle

The rug at the Pet Shop while walking the Gold Puffle

Sad Gold Puffle
Add a photo to this gallery 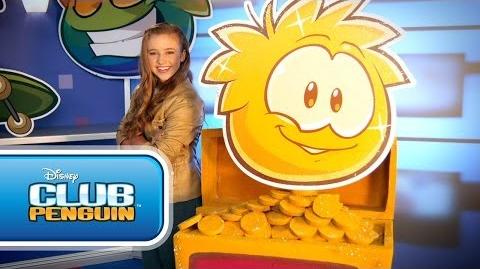 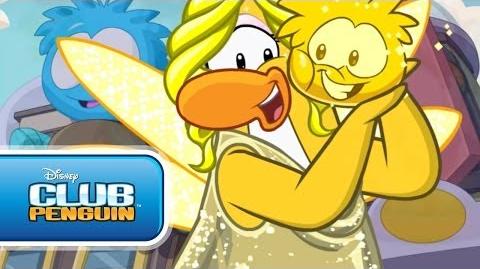