The Gong Show was a new feature included only in the Dojo's grand re-opening, with the arrival of Sensei shown as well. Penguins would wait for around for five minutes to throw snowballs at the gong when it came out. When they threw a snowball at it, the gong would make a clashing sound similar to the gongs in the Ninja Hideout. The gong would appear for players to hit for almost five seconds, giving players enough time for one penguin to throw approximately three to four snowballs at it.

The countdown that took place before each Gong Show 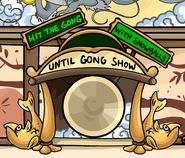 During a Gong Show, when snowballs could be thrown at the gong
Add a photo to this gallery

Retrieved from "https://clubpenguin.fandom.com/wiki/Gong_Show?oldid=1874421"
Community content is available under CC-BY-SA unless otherwise noted.