Gonzo the Great is the Muppets' daredevil. He is always up to something crazy like: holding a piano with one hand while reciting math equations while standing on a hammock, running with bulls on stage, being shot out of a cannon at weddings, etc. Before Gonzo joined The Muppets, he was a plumber. He and his chicken girlfriend, Camilla, would drive around the country looking for people who need help with plumbing. Before he joined The Muppets, he also wanted to go to India and become a belly dancer. No one really knows what he is exactly. He is often referred to as a "whatever". However, in 'Muppets From Space' in 1999, Gonzo turned out to be an alien, but The Muppets never mentioned it since.

Gonzo appears in the Day 3 act of the Muppets World Tour on March 22. He is stationed in Spain (the Snow Forts). Gonzo teaches penguins to master the art of the running of the bulls. You equip the Bull Cape and complete the performance, where Gonzo then gives you the Sombrero Cordobés.

Gonzo had an interview with Dot the Disguise Gal in the Club Penguin Times during the second week of the party.

In #WaddleOn with The Muppets, Gonzo is a minor character. He is seen as the security guard at the Museum in England, and accidentally lets the Goldsmith Force member get away with the Golden Anvil. Gonzo then proceeds to ask Kermit and Fozzie to help look for the thief. 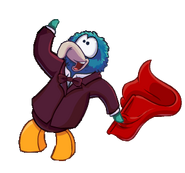 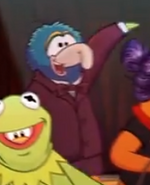