Grasstain or Smulley (real name Charity Gerbrandt) was a moderator that worked for Club Penguin. She was the Production Manager, Lead Producer, and Principal Creative Lead. Her first appearance was in the Disney Channel: Game On Marvel Super Hero Takeover Preview, and she did not make an appearance again until the Club Penguin Summit.

Her and Polo Field 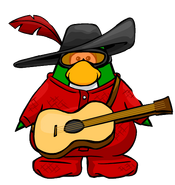