Club Penguin Wiki
Register
Don't have an account?
Sign In
Advertisement
in: Parties, Parties of 2007, Halloween Parties,
and 2 more

It was during this party that the Yellow Puffle was seen in the wild for the first time. It could be seen at the Forest or at the Ski Hill, in which it only appeared for a few seconds. Yellow Puffles became available to members in November of that same year.

A sketch from the blog, of the Forest. 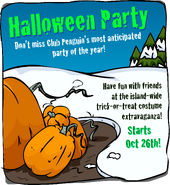 A riddle given by the Keeper of the Boiler Room, who awarded a candy apple as part of the scavenger hunt

Octi, seen through the Cove Binoculars