Club Penguin Wiki
Register
Don't have an account?
Sign In
Advertisement
in: Parties, Halloween Parties, Parties of 2010,
and 2 more

The Halloween Party 2010 was the 6th annual Halloween Party that occurred in Club Penguin. Like all other Halloween Parties, there was a Candy Hunt. The Great Storm of 2010 arrived on October 28th, just in time for the party. Also the Haunted House returned as mentioned in the members section. Gary came and was meetable for this party. There was also a new area called the Dark Chamber which was a small mini quest located at the Forest. It was supposed to end on the 3rd, but lasted longer due to some updates and bugs.

Clue 1: The hunt begins, you're on your way, start searching where the starfish lay.
Answer: Beach (behind a tree on the right hand side.)

Clue 2: The next one's hidden out of sight, overlooking a snowball fight.
Answer: Snow Forts (behind some trees on the left hand side)

Clue 3: To find the next hidden delight, look far away, near glowing light.
Answer: Iceberg (Behind the stem on the pumpkin.)

Clue 4: Through monster costumes you must dig. This one will make you flip your wig.
Answer: Clothes Shop (On the first wig.)

Clue 5: Now try to find a cheesy scent, then search a spooky instrument.
Answer: Pizza Parlor (hanging off the organ of the pumpkin decorations.)

Clue 6: You'll find the candy you adore, where the ninja shadow was before.
Answer: Ski Lodge (hanging out of the mirror on the fireplace.)

Clue 7: A witch has used this candy to, improve the flavor of the brew...
Answer: Plaza (inside the witches pot with the white stick sticking out.)

Clue 8: The last one's hidden near the smile, of the largest pumpkin on the isle.
Answer: Beacon (Right by the Telescope.) 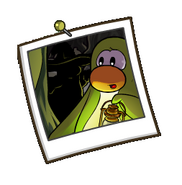 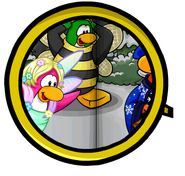 A Costume preview from the What's New Blog

A sneak peek in the Club Penguin Times. This hints to the new catalog 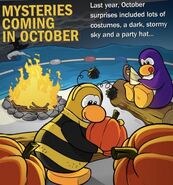 Another Preview of the Halloween Party. It also shows the penguin making the 5th Year Party Hat

The first Login Screen advertising Halloween Party 2010. It countdowns to when the Halloween party starts 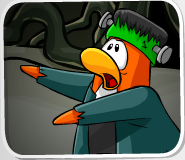 The Login Screen for the preview of the Halloween Party 2010

Another preview of the Halloween Party

The newest Login Screen for the Halloween

The banner for the party