A head item was a category of clothing in Club Penguin. It included items worn on the head such as hats, helmets, and wigs.

The Party Hat, one of the oldest items, that was given out during the Beta Test Party 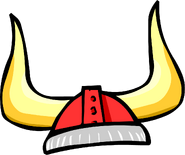 The Disco, one of the first wigs

The New Player Red Baseball Hat, a head item that all players own by default
Add a photo to this gallery