Herbert's Fortress was Herbert P. Bear's base for Operation: Blackout, and the center of government in Club Herbert.

He used this fortress to hold captured members of the EPF such as Gary, Dot, Jet Pack Guy, Rookie and the Director (Aunt Arctic). Inside the fortress were a series of vents that took players to different Security Terminals. Players had to hack these in order to open five locks to enter the Central Command Room and self-destruct the High Frequency Infrared Reversion Laser to save the island.

After the solar ray was destroyed, the fortress was set on self-destruct and wasn't seen again after Operation: Blackout.

The base was located on a mountain called "A Lonely Mountain" which was quite near the Ski Hill and the Ski Village. It was surrounded by dense jungle.

Herbert's Fortress as seen on the homepage 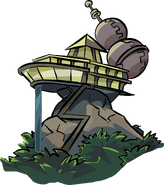 Herbert's Fortress on the Blackout Background

A Log Off Screen ordering agents to infiltrate the fortress

Herbert's Fortress from the aftermath of Operation: Blackout
Add a photo to this gallery

Retrieved from "https://clubpenguin.fandom.com/wiki/Herbert%27s_Fortress?oldid=1905223"
Community content is available under CC-BY-SA unless otherwise noted.