Herbot was a giant robot built by Herbert P. Bear that appears at the Halloween Party 2015. Herbert created Herbot in the image of Gary's MascBots, in order to help him take over the island. However, the robot was made "too clever" and has a mind of its own, not listening to Herbert. Herbot is also much larger than the other MascBots. 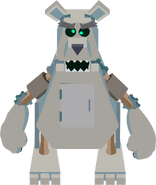 The Herbot item
Community content is available under CC-BY-SA unless otherwise noted.
Advertisement